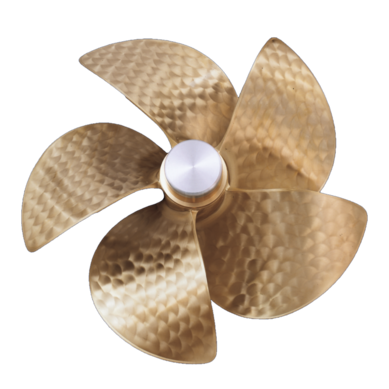 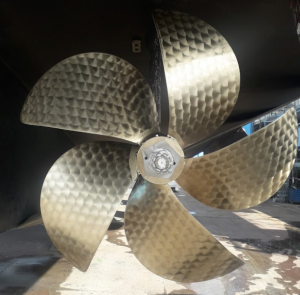 We succesfully concluded the sea trial of a M/Y Benetti equipped with a built-up propeller developed by DETRA. This type of propeller was developed through a research project titled “Study and development of a innovative propulsion system with built-up blades, highly efficient, particularly for hybrid  and electric propulsion systems in nautical context”, which was co-funded by F.E.S.R. (European Fund for Regional Development). 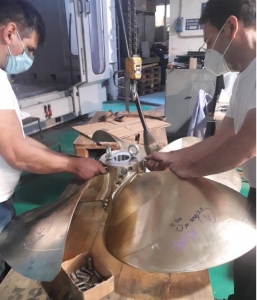 This project provided the prototype of built-up propeller which was installed on board, with help by the Naval, Electric, Electronic and Communication Engeneering Department (DITEN) at the University of Genoa., by using the most modern technolgies available. Among these are: the computational fluid dynamic (CFD) to determine the stress on the blades; the finite-elements calculations to determine the stress on the connection between blades and hub; and the manufacturing via numerical controlled miling to obtain the highest precision possible. 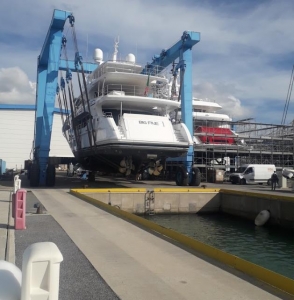 This type of propellers allows to work on the blades and the hub separately, connecting them with a series of bolts. This allows us to facilitate their manufacturing, movimantation and maintainance over the ship’s life, for example by replacing the single blade if necessary, while still keeping the vessel in the water.

Our goal at DETRA has always been to combine engineering and production abilities in order to realize screw propulsion system projects.

This site uses cookies. By continuing to browse the site, you are agreeing to our use of cookies.

We may request cookies to be set on your device. We use cookies to let us know when you visit our websites, how you interact with us, to enrich your user experience, and to customize your relationship with our website.

Click on the different category headings to find out more. You can also change some of your preferences. Note that blocking some types of cookies may impact your experience on our websites and the services we are able to offer.

These cookies are strictly necessary to provide you with services available through our website and to use some of its features.

Because these cookies are strictly necessary to deliver the website, refuseing them will have impact how our site functions. You always can block or delete cookies by changing your browser settings and force blocking all cookies on this website. But this will always prompt you to accept/refuse cookies when revisiting our site.

We fully respect if you want to refuse cookies but to avoid asking you again and again kindly allow us to store a cookie for that. You are free to opt out any time or opt in for other cookies to get a better experience. If you refuse cookies we will remove all set cookies in our domain.

We provide you with a list of stored cookies on your computer in our domain so you can check what we stored. Due to security reasons we are not able to show or modify cookies from other domains. You can check these in your browser security settings.

We also use different external services like Google Webfonts, Google Maps, and external Video providers. Since these providers may collect personal data like your IP address we allow you to block them here. Please be aware that this might heavily reduce the functionality and appearance of our site. Changes will take effect once you reload the page.